Some of the participants of the Houston interfaith prayers.

In the wake of Hurricane Harvey’s unprecedented flooding and devastation, Texas Governor Greg Abbott proclaimed Sunday, Sept 3rd as a Day of Prayer in Texas—which happened to coincide with the birth anniversary of Bhaktivinoda Thakur, a 19th century Vaishnava Hindu saint and theologian who envisioned people from all nations coming together harmoniously through the blissful chanting of the holy names of God.

Prior to Harvey, ISKCON of Houston had planned Kirtanfest, a weekend of kirtan or devotional call-and-response prayerful chanting, over Labor Day weekend. After nearly canceling the event due to safety concerns, ISKCON decided it was vital to carry on with Kirtanfest in a shortened format, dedicating it for the healing and recovery of the people of Texas. In addition, to make it all-inclusive, they added an interfaith prayer segment in the spirit of Bhaktivinoda, who wrote in his Shri Chaitanya Shikshamritam 8-9:

When we may have an occasion to be present at the place of worship of other religionists at the time of their worship, we should be staying there in a respectful mood contemplating thus: “Here is being worshipped my adorable Highest Entity (God in a different form than that of mine). Due to my practice of a different kind, I cannot thoroughly comprehend this system of theirs; but seeing it, I am feeling a greater attachment for my own system. The Highest Entity (ie. God) is not more than one. I bow down with prostration before His emblem as I see here and I offer my Lord, Who has adopted this different emblem that He may increase my love towards Him in the form as acceptable for me.” 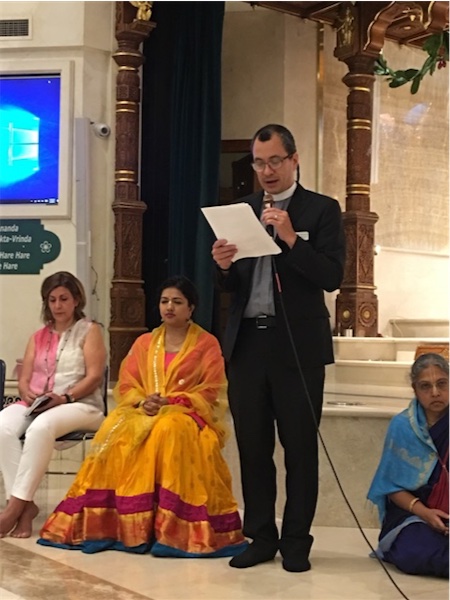 Dhiralalita Dasi, a social worker from ISKCON Dallas, set the tone for the interfaith prayer and asked esteemed guests of different faiths to offers prayers to God in their traditions.  Dr Zahra Jamal, Associate Director of the Boniuk Center for Religious Tolerance at Rice University, recited the first non-denominational prayer. She was followed by the Rev. Gregory Han,  Director of Interfaith Relations at Interfaith Ministries for Greater Houston, which is Houston’s oldest interfaith service organization. He said the  prayer he had spoken earlier that morning at the George Brown Convention Center representing the Presbyterian Church. After each prayer, everyone observed a minute of silence to reflect on & internalize the prayer.

The Islamic faith, represented by four adherents of the Aga Khan Council for Southwestern United States, recited a beautiful song, Allah, a hamd which is a devotional song in praise of God Almighty.

The prayers concluded with the offering of pusphpanjali by the 200 people in attendance, followed by an aarti to Thakur Bhaktivinoda.